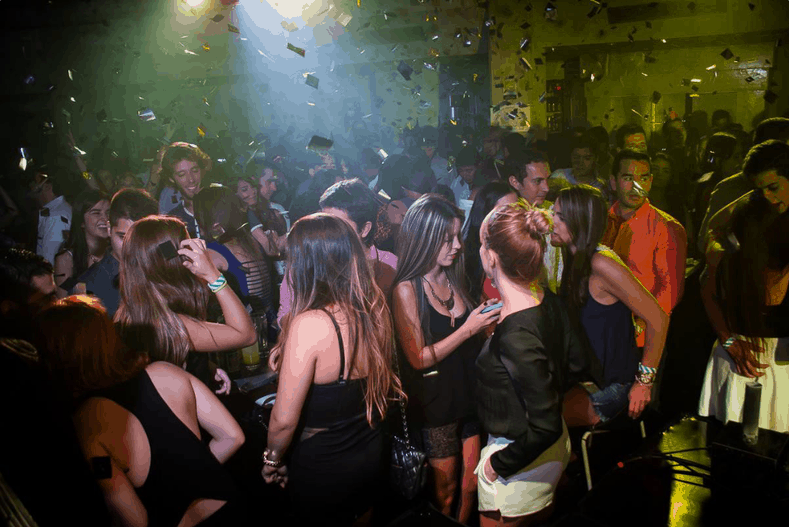 November was a good month for us, I must say, and it is in no small part thanks to bored Americans looking to spend this holiday away from all the cold and binge eating. Enter Medellin, a city that not only has perfect weather all year but is a place where Thanksgiving is non-existent.

Let’s get started.. This past weekend we catered to 5 guys from Long Island that had never been to Medellin before but have had a few short visits to Bogota. Now, I have no idea why anyone (short of having a business meeting) would ever want to set foot in the bustling, boring metropolis that is Bogota but we know their perspective on Colombia changed drastically after having a VIP experience with us here in Medellin.

We had been talking to these guys for months and after going back and forth for a while, they did not get the apartment they originally wanted. However, we did hook them up with an apartment on a terrace a few blocks from Parque Lleras.

Day 1 we thought we’d start their weekend off with a short visit over to the always popular massage parlour where an hour with some of the most beautiful masseuses they’d ever seen was the perfect welcoming and a great start to an epic weekend.

After drinks and a longer than expected period of meditation at the massage parlor, as expected, the boys worked up quite an appetite.

We went to dinner at Medellín’s #1 steakhouse where soccer superstar Lionel Messi had been to dinner earlier this year and you guessed it, once the idea of a chill night at the strip club was brought up, no one dared to put up a fight.

I had never seen a group of guys this happy at a strip club before in my life, it was if a blindfold had been taken off and these men were introduced to one of the happiest places on earth, a Medellín strip club.

We probably should’ve mentioned to you that these guys booked the ultimate package with us, something unheard of so far here at Medellin VIP. From Thursday to Monday they booked, signature villa party, boat party in Guatape, Pablo Escobar Tour and the always epic ATV Adventure tour up in the mountains.

By now, you the reader should’ve figured out that Medellín VIP loves finca parties and if you’ve followed our blog, you should know why. It is the ultimate celebrity experience where you feel like you’re in a hip hop video and not just that but you’re the star of it.

The finca’s fridge was stocked with alcohol and as usual, the chef was already at the scene cooking up his always popular Colombian “parrillada” made up of Colombian chorizo, blood sausage, churrasco, pork loin, chicken wings and BBQ ribs. The perfect comfort food to absorb all of the alcohol that was to come.

After hours of wrestling in the pool and dancing, all of the alcohol finally got to these guys and the party needed to be taken back to the city of Medellin.

The 60 minute drive seemed to help replenish the crew (of which 3 were hammered beyond recognition). We arrived to the apartment where instead of staying at the apartment, we took the party over to Parque Lleras, the will to party was strong and there were no signs of slowing down.

A few months back, our clients would constantly complain about the 2 hour drive over to the beautiful Guatape and although they would never regret going, i’m pretty sure they would not want to drive out for another 2 hours.

Recently though, not only are we taking our clients over to climb the 7,000 ft rock but we’re also making this an even better trip by renting 10 person speedboats out on the lake where not only do our guests enjoy the view from the Aquatic Center in Guatape but also get to enjoy activities such as jet-skiing and wake-boarding.

After a 30-minute walk up the rock (15 minutes longer than expected due to hangover issues) the crew finally made it up to the top and after 15 minutes of what appeared to be getting ready to regurgitate the past evening’s alcohol intake, we decided it was time for breakfast.

The aquatic center is only a 5 minute drive from the rock and the gang (made up of the 5 guys and 2 special lady friends) as soon as they saw the speedboat, cracked open half a dozen beers and got ready to wakeboard.

We had by far the nicest speedboat on the lake, not to mention the loudest music which obviously got the attention of onlookers who probably mumbled to themselves, “these damn Americans”.

Sunday began like a typical Sunday should begin, the guys got up fairly late, went to go get breakfast at the local bakery around the corner and slowly got ready for yet another fun outdoor adventure that not all of our groups have the pleasure of enjoying.

We were picked up at about 1 pm and we headed up to Rionegro and right next to the airport where we have Medellin VIP’s ATV Adventure tour.. He owns a small fleet of ATVs and trust me when I say that this trail is nothing short of amazing.

The 4-hour tour takes you high up in the mountains where all you see is farms, cows, donkeys and locals walking to local markets and watering holes. Honestly, I didn’t even know this place existed but it is the perfect experience to get away from big city life and see “the real Colombia”.

After a 45 minute practice run around the block (where apparently the instructors find out who’s still drunk and who isn’t) we begin the trail which starts in a swamp-like area filled with small obstacles which vary in level of difficulty.

We made it up to the top and saw a local watering hole where we saw the town drunk(s), had a big lunch made up of homemade chorizo and assorted pieces of Colombian pastries. After lunch and a couple of beers each, it was time to head back down.

The ride down although a lot more difficult, proved to be a lot more rewarding and even though we should’ve taken more precautions due to the dangers of driving at night in off-road terrains, it was so exhilarating to drive in such conditions that speed was actually increased and this blogger ended up hitting more than one bush.

At about 9pm we were back safe and sound at the apartment with one or two bruises and more than a dozen mosquito bites but the night was young and we weren’t going to let their last night in Medellin go to waste.

The guys called over a few lady friends we had met a few nights ago for a going away house party. We hired a woman to cook us up a Sancocho (traditional Colombian stew).

Now, i’m not going to specifically mention the events that took place that night but I will say this, the number of women that were in that apartment that night, almost tripled the number of men and some of these women were not above expressing their “affection” for each other right then and there, with no one asking them to do so. All in all, it was a very strange but crazy fun night and possibly was the best way to bid farewell to an impeccable weekend.

The morning of departure is always an emotional one, not only because their vacation is over but because clients know they must go back and endure December weather and put up with all of the stressed that goes along with the holidays in America.
The 5 guys left behind memories and the hope to be reunited again back here in Medellin. In fact, to this day, we still keep in touch and all they ask for is new pictures to get them through the day.