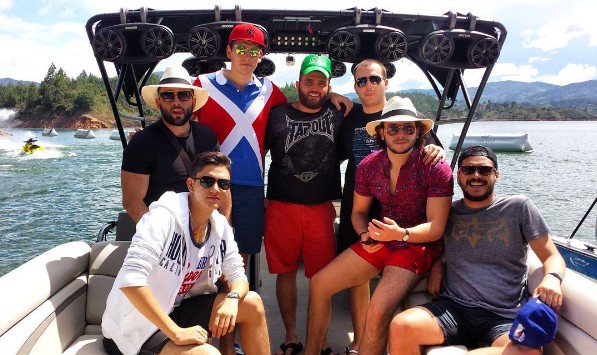 A Returning Customer is a Guaranteed Blast

Returning to the city of eternal spring less than one year after visiting for the first time is a luxury not all men can afford. Not because the trip is expensive (on the contrary, these trips are rather inexpensive to say the least) but because there are very few excuses a group of bachelors can use to re-visit.

We all know travelling is about seeing places and learning about cultures but when all’s said and done, most people would much rather go somewhere new than visit a city for a second time (in one year). Be that as it may, Medellín VIP had a group this past weekend that were brave enough to return for a second trip and not only were the stakes raised but to their surprise, the second time was just as good, if not better, than the first.

As usual, we’re not going to reveal any details but we will say this group visited Medellín in mid 2015, they stayed at one of our lavish penthouses and were part of a group of 12 gentleman that at the time were scared of the city. This time, a few of the guys from the original group managed convince one of their friends to have their bachelor party out here. Whether or not they used this as an excuse to plan a return trip, we’ll never know.

We’ve been talking to these guys since about October and they wanted the works, multiple apartments, a luxury airport transportation, the same VIP host and an activity set for every day from Thursday to Sunday.

Now that you have enough context, allow me to begin. We started the week the way we usually begin our bachelor party weeks, with lots and lots of calls and planning making sure everything runs smoothly. There were 12 guys in total staying in a whole apartment building about 3 blocks away from Parque Lleras.

We used our luxury Mercedes-Benz sprinter van to pick them up from the airport and filled the bus with champagne, ciroc, scotch, beer and Aguardiente (a local spirit). Once the few returning customers recognized a few familiar faces they knew they’d hit the ground running. On the van we had a great sound system, a few friends we invited over and 45 minutes of music and alcohol to catch an early buzz. Once we reached the apartment and realized how close they were to the action, we all decided an apartment was just a place to have breakfast, sleep and pregame.

We had lunch and started dancing with some friends that stopped by while the newbies were given the itinerary of the upcoming activities that were going to take place. They were as follows:

This seems to be a pretty standard itinerary but remember, we plan each of our itineraries per client so if you’re not about that life, we’ll work around all of this stuff.

Anyway, after the meet and greet, we decide to take a walk around Parque Lleras and scan the area for potential activities for the night. We had a plan to hit up the Charlee Hotel for the live salsa night but unfortunately the guys didn’t enjoy salsa as much and decided to try their luck at a local watering hole, Fase Dos Strip Club.

The place was not just packed but it was also pretty lit. The bouncers advised the dj of the large crowd of Americans that were walking in and it was almost if he knew they were going to get even more turnt whilst listening to Drake.

Day 1 was tiring but mostly due to jet-lag and the pre-gaming that went on at home prior to the strip club. They awoke on Thursday to one of our chefs cooking them a chicken stock that gave them just enough energy to get up and ready.

At about 11am we headed up to Saint Felix which is a small town just outside of Medellín. Saint Felix is known for being one of the area’s best places for paragliding and this was what was on the list for day 2. After heading up there and seeing how even 10 year old kids were doing it, we managed to convince all but 1 of the guys to take flight (turns out he was scared of heights or something).

Being suspended 20 minutes up in the air can give a man quite the urge to quench his thirst which is why the guide was waiting for them at the bar with a few six packs Club Colombia, the city’s most popular brew.

We headed back to the apartment where after a nap, our guide brought them over some Colombian food for lunch. Plenty of carbs to absorb all of the alcohol that was soon to come.

We had reservations at Hatoviejo which is one of the city’s oldest and most respected traditional Colombian platters with an assortment of other international plates. The decor is just stunning and the food is amazing. When you think Colombian food, rice, beans and chicharron come to mind but this place will have you going home looking for that Colombian experience to show your friends just how good our food really is.

Anyway, after dinner we had reservations at Club Luxury which is one of Parque Lleras most poppin’ night clubs for young people. You’ll find big groups of females all mingling on the first floor while the bigger parties are in their own little world on the second floor. The second floor allows you to see everything that’s going on downstairs, also.

Sometimes there is just no point in organizing and making reservations for nocturnal activities because in the end, all roads lead back to the strip club….

Day two actually ended pretty late and these guys probably weren’t expecting going to bed at around the same time the chef was ringing the doorbell to come upstairs.

We had a city tour programmed for that day that had to be moved up to about 1pm and even then the guys still weren’t all ready (it’s like trying to discipline a group of cats). When they were finally ready, the tour was a mix of a Pablo Escobar Tour as well as a Medellín City Tour.

Funny thing about this group is that they actually decided to bring all of their alcohol on the tour, thus basically warning the guides and driver that only a few were going to do the actual sightseeing.

Long story short, half of the group got drunk on the tour (sadly, this happens more times than you’d think) and had to be escorted back to the apartment to wait while the rest of the interested crew learned about the city.

Not exactly the best start of the day but this is just the beginning. Dinner that night was at Carmen Restaurant and if you’ve read our previous posts you’d know we absolutely love this place and get our clients VIP seating every time we head up there. After a few rounds of old-fashioned drinks and multiple bottles of Carmenere, the guys were ready to go home.

These guys weren’t really used to 4 day party weekends so on day 3, i’m afraid that Medellín VIP has to admit one of our group wanted to hit the sack early. Day 3 concluded rather abruptly.

Hitting the sack early on Friday was probably the best thing the gang could’ve done. They had an early pick up for a 3 hour ATV trip Saturday morning and take it from a guy that’s been on these tours before, you’ll need to have had a good night’s rest in order to function on one of these things.

It was a rainy Saturday morning and I forgot to mention these guys originally had a boat party scheduled in Guatape (in my opinion, the better of the two options) but it was raining a little, therefore the ATVs were a great option.

the tour is in Rionegro, a few minutes away from the airport and given that most of these guys had never driven an atv, a 20 minute lesson was in order.

Long story short, the ATV tour goes through swamps, mud, concrete, the highway and you even get to stop in a small village where beers and chorizo are the best fuel for 2 hours on the road.

After the tour, we were waiting at the apartment with a couple of boxes of pizza and a half a dozen pitchers of Sangria. Pre-gaming was in order for one last night before they headed back to reality and back to work.

A few bottles of Jack and Ciroc later and before we knew it, it was already 11pm. It’s funny how being a Saturday night, you’d expect them to want to meet their reservation at one of the city’s best nightclubs but nope, the gang opted to visit the strip club they didn’t get the chance to visit the night before, La Isla.

La Isla is just about the same size as fase 2 but nowadays it’s hard to say which of the two is better. Both have a similar lineup, same amount of girls but the only difference is, La Isla is a lot darker and allows for a little more privacy. La Isla is also a bit further so in the end, we recommend hitting up both places at least once before you leave.

On this night, however, the guys felt they had a better experience and already got to know the lineup at fase dos so after a bottle of Grey Goose and a few beers we took a few cabs down to the promiseland.

Immediately after entering the girls recognized our group and paid extra attention to us. They knew we were ballers and were going to go all out on this last night.

It’s funny how used to drinking Aguardiente (the local spirit) the gang got and were actually chugging this stuff like nothing. The guys were drinking, the girls joined in and all in all the night unfolded and ended up being a memorable last night (and morning).

We actually hung out with these guys until sunrise and being that their flight was late, we had the chef come in for one last big breakfast. He made protein shakes, waffles, crepes and an assortment of fruits to give these guys the added boost before they said their goodbyes.

It was a fun last night and it really showed us as a company what our strong points are and why we’re the best at what we do. Our customer service, honesty and hookups when it comes to activities allows us to exceed customers expectations. So if it’s your first, second or even third time down here, there’s always something we can help you do and do it better,

They ended having more fun on this trip than they did the first time and i’m sure word will spread within that group’s group of friends and word of mouth will make sure that this won’t be the last time we’ll hear of these guys down here. In fact, the best man just hit us up this week telling us he’s in the works to head over for at least a weekend and pick up where he left off. Goes to show you, Medellin is the place to be for action-packed weekends and a returning customer is always a happy customer with Medellín VIP.