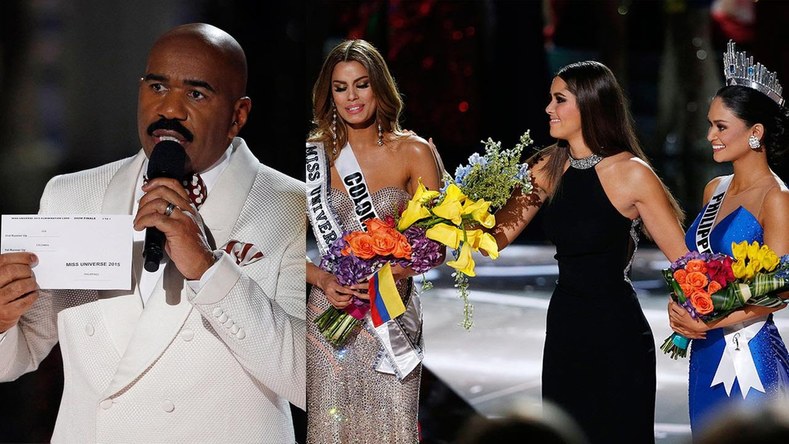 The Miss Universe Pageant, previously owned and sponsored by real-estate mogul Donald J. Trump made headlines last night for all the wrong reasons. This time, it wasn’t a contestant confusing the audience with ridiculous answers or Trump himself with his usual asinine comments but instead, this year’s competition was hit by hurricane Harvey, Steve Harvey.

Harvey, a television personality known for having hosted multiple tv shows over his 30 year television career, made a faux pas on national television last night when he announced Miss Colombia, Ariadna Gutierrez as the winner, only to then recant and name Miss Philippines, Pia Wurzbach as the winner.

Colombians were outraged in no small part because earlier this year, Paulina Vega from Barranquilla, Colombia had brought the title to the South American nation after more than 50 years.

Upon announcing that Miss USA, Olivia Jordan was the third runner up, Harvey made the announcement that 45 million Colombians were waiting to hear, that the title is staying in Colombia where Paulina Vega had brought it in January.

But after Arevalo was crowned, after the swarms of photographs, tears and hugs from fellow contestants, Harvey asked for everyone’s attention as he explained he had made a “human” mistake, that Arevalo was not the winner. The announcement came about 2 minutes after, which was more than enough time for Wurzbach to be making her way away from the center of the stage thus accepting her second place title.

Millions of Colombians in outrage, watched as Paulina Vega (the current Miss Universe and Colombia native) had to remove the crown from Gutierrez head and place it on a baffled Wurzbach who was both excited and shocked with the result. The show then concluded and as usual, the tweets followed.

Immediately after the show, Harvey tried to apologize for his blunder but instead made matters worse with this tweet: “I want to apologize emphatically to Miss Philippians and Miss Columbia this was a terribly honest human mistake and I am so regretful.” The host of Family Feud and the Steve Harvey Show misspelled both Colombia and the Philippines adding to his already tainted relationship with Colombians.

Harvey went on Twitter to apologize but made matters worse when he misspelled both ‘Colombia’ and ‘Philippines’.

The country is outraged and although the mistake was likely to happen to anyone, more was expected from a man with a career in television that spans more than 3 decades. Was this a “human” mistake as Harvey so blatantly called it? Or was this perhaps a publicity stunt to increase ratings? We will never know… One thing is certain though, Steve Harvey should avoid Colombian restaurants in the near future.

Consecutive Miss Universe titles would have been perfect to attract more people to this beautiful country that yearns for worldwide attention but even if we didn’t win, I’m sure the millions watching at home can honestly say Ariadna was not only more beautiful but also comes from a place where more beautiful women per capita than anywhere else.