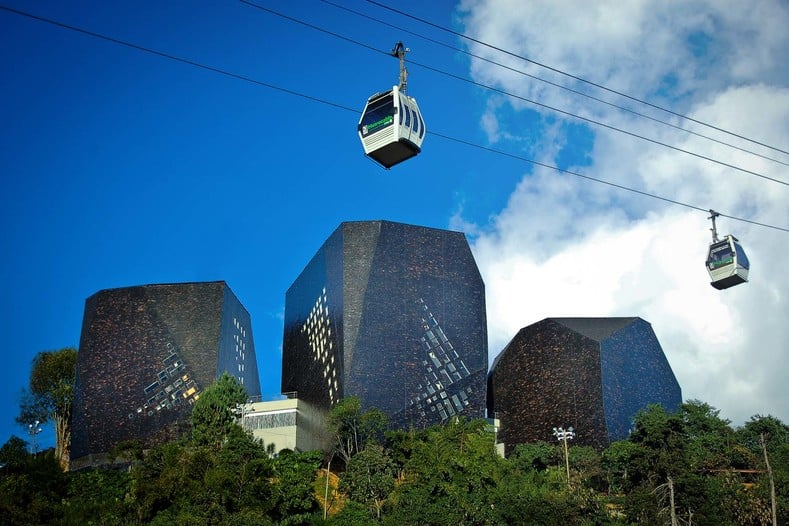 Due to the heavy influx of clients this summer, our blog page hasn’t been updated as frequently as we’d like it to but Medellín VIP always likes to keep readers in the loop with what some of the crazy experiences our clients come across. This week the spotlight is on 6 guys from Miami, Florida and one fun-filled weekend that had not just excitement but also 3 hangovers and a trip up to the mountains they’ll probably never forget.

It all began Friday afternoon where 6 guys flew into Medellín for the first time expecting to see an old city with dirt roads and quite possibly even primitive people walking desolate streets. They were immediately surprised when they saw such a clean city and a view driving down to the city unlike they’ve seen before.

We set up accommodations for them about 2 blocks from Parque Lleras which left them close enough to the action to walk to yet far enough to be able to sleep at night with all the noise. Once they were acclimated we took them over to a typical Colombian restaurant where some of them enjoyed the artery clogging perfection of a meal known as, Bandeja Paisa. Off to a good start.

After a few drinks back at the apartment and setting up the itinerary for the weekend we realized we’d have very little time to do the barrage of activities most people wanted to participate in. The most important of which was the very hyped up massage parlor tour where we take you to a few of the city’s best massage parlors where you can enjoy a relaxing deep tissue massage to prepare for the long weekend ahead.

The night began at dinner a few blocks over at one of the city’s nicest restaurants and not only were these guys impressed with the restaurant’s decor but also the food was a mix of contemporary cuisine and international flavors they never expected to find in Medellín.

After dinner we headed over to the Parque Lleras area where a few after dinner, drinks were in order. The streets were packed and the guys just wanted a nice tranquil environment which is why as soon as the idea of a strip club in Medellin was put on the table, no one hesitated. Nothing screams tranquility more than copious amounts of Tequila and beautiful women all around you. Especially when the strip club’s decor included a waterfall, it was like taking children to Rainforest Cafe.

After a what you can call light beginning to the weekend there was much for us to do to prepare for Saturday. We rented for these guys, a villa out in the mountains about 2 hours away from the city. So at 10am we arrived at the apartment only to discover that a few of the guys had just gone to bed a few hours prior.

So what we did was load up the bus with booze and a few lady friends and off to the finca we went. The road is not hangover accessible so if you’re considering a trip to the outskirts of Medellín, remember to drink lightly prior to.

We hired our chef, had him cook up a feast made up of items found in a Colombian BBQ. Blood Sausage, chorizo, marinated steak, arepas and wings were just some of the items that were on the menu.

The trip was long but once we arrived the guys immediately forgot about being on a bus for 2 hours. The view was something out of this world and once they saw hot girls in the pool, food, alcohol and perfect weather, they felt like they were in a rap video. The perfect experience for any Medellín Bachelor Party. The villa also had pool tables, a large soccer field and plenty of avocado and lime trees throughout the property.

After spending the day in Barbosa, we headed back to the apartment where as we suspected, we realized the trip had taken a lot out of these guys. 2 hours, a nap and 3 boxes of pizza later and they were ready to rock out again. But again, in order to be prepared for our Sunday daytime activity, we needed to take it easy.

After a very busy Saturday where no second was wasted, Sunday began at about 12pm where after a quick beer run we were picked up by our driver and began the Pablo Escobar city tour. This tour highlights the city during the rough period of the 80s and 90s where drug kingpin Pablo Escobar was on top of the world.

We took a tour to the building where he lived that was bombed by the Cali cartel in the late 80s, to the apartment where he grew up, the cemetery where he’s buried (and a few gravestones away you’ll see Griselda Blanco’s gravestone, has anyone ever seen cocaine cowboys 2?), and the roof where he was shot. We got to see his safe, his room and took a tour around the city that these guys called spectacular and worth making up an excuse to revisit.

When the tour was over we walked over to Parque Lleras for lunch and for some “sightseeing” and believe me, there is always much to see.

The Medellín Flower Festival had begun that weekend so after we got some pizza we decided to walk over to Parque Lleras yet again to scout the scene and possibly hit up a club. It was packed.

We picked up a few girls and had a little house party for their last night.
Next morning you can just tell this group just hated having to leave and this was one of those groups of guys that you knew were going to come back sooner or later. Another group and another Medellín VIP weekend wrapped up.

Is this the type of weekend you’d like to spend with your boys in Medellin?