A Medellin Bachelor Party for the History Books 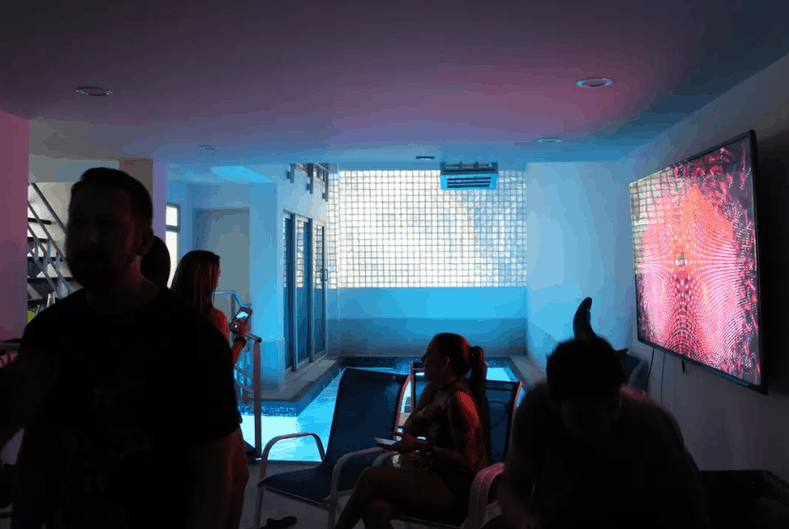 A Medellin Bachelor Party for the History Books

This past weekend we played hosts to a culturally diverse bunch from a wide array of cities. These guys have all been friends for years and grew up in a small town in the Northeast. Years later, they moved down to Miami and are successful doctors, accountants and small business owners.

It was their first time in South America and decided to give Medellín the opportunity to amaze them for their boy’s bachelor send-off.

We hooked them up with a sick penthouse located right in the center of Poblado, a brief 5 minute walk to Parque Lleras. The penthouse is known simply as, “The Compound” and features 2 large jacuzzis, 9 spectacular bedrooms, a party/lounge area and if that weren’t enough, the architects also managed to incorporate an indoor pool!

Back to the story.

They arrived on Thursday afternoon and even though I can’t reveal their names, the trip started on a bad note when they were held an extra 2 hours at customs. Turns out one of the guys’ shared names with an FBI most wanted. Too funny.

Once they finally got through customs and made it home, their lasting facial expression of exhaustion slowly faded when they witnessed we had 7 VIP hostesses at the compound. These hostesses were there to party with the group and provide some early trip entertainment on a rainy afternoon.

After a few hours of partying and drinking, the girls left and the group decided to indulge in, you guessed it, more partying and drinking. We went to our usual Thursday night club where we have our own VIP section reserved and ordered a few magnum Belvedere bottles. The music was a little dull but the talent was out of this world. Open bar until 2am and first 200 girls get in free, not bad.

Due to jetlag and semi-lethal doses of THC, the evening ended earlier and the gang decided to call it a night.

The group also booked breakfast through Medellín VIP and our chef was there bright and early cooking up an assortment of traditional Colombian breakfasts.

Once breakfast was done, I decided to head up to Pablo’s legendary mansion high up in the mountains. If you’ve followed our blog you’d know that the mansion was turned into a massage parlor and hasn’t looked back since.

With beautiful women walking to and fro, along with happy endings in every corner, this place is one of the happiest places on earth.

Dinner was at Burdo that night which happens to be a trendy upscale spot a few blocks from their penthouse. Great food, cheap drinks and pretty girls, make this place the perfect dinner spot and pregame pub.

Once dinner was all said and done, the guys decided to skip the club scene and just head straight to the promised land, i.e, the Medellin Strip Club.

These guys have travelled a little bit and have seen beautiful women in strip clubs all over the world but even they were impressed with the cornucopia of high-heeled bimbos crammed tightly in this small space.

Lapdances aren’t very common so they most likely just choose the full service massage in the back room.

We brought a few girls back to the penthouse where the manager had already started up the jacuzzi. A brilliant end to a fun night.

Despite the night ending pretty late, they still managed to get up early and take the day trip to Guatape.

Guatape is a small town located two hours from the city. The town features a manmade lake where we usually rent a boat and spend the afternoon just hanging out with girls and drinking.

The purpose of the town is to visit the monolith that makes the area famous, La Piedra del Peñol (Peñol Rock). A monolith with 742 stairs that you must climb to reach the summit and behold the spectacular view. The number of stairs sounds like a lot but it really only takes 20 minutes to climb. I’ve climbed it many times with a hangover, in fact, I don’t recall ever going up there without being hungover, not recommended if you’re still inebriated, though.

While most of the group was in Guatape, a few of the guys stayed back to meet a few Tinder matches and hangout poolside. When we got back, they were passed out, they looked more tired than we did.

When we arrived at the apartment, our chef was cooking up a traditional Bandeja Paisa dish, the perfect alcohol absorbing platter to ensure a longer night.

That night there happened to be an Armin Van Buuren concert so the guys decided to head over with a few friends they had met. It was a rainy night but pretty girls and deep house was the perfect convincing tool to skip the conventional nightclub.

Unfortunately, the concert ended at 5am and yours truly was not there until the very end, but judging by their snapchats, the concert did not disappoint.

After breakfast was served at 9am, I headed over to the Penthouse where last minute goodbyes were in order. They seemed pretty sad considering that they had to fly back up to the cold weather and even colder women. They’ll be back.