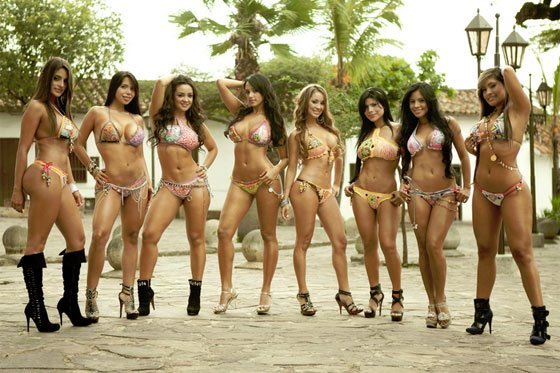 From American to Canadian and even Indian bachelor parties, Medellín VIP caters to everyone and works tirelessly to ensure your trip is like no other trip, no matter how big your group is.

This past weekend we took in a group of 19 guys that we’ve been talking to for a few months now that needed help with accommodations, transportation and concierge.

Now, handling 19 guys looking to party and drink all the time is not an easy feat, but this weekend we did our best. The following are the events that went down.

We picked the guys up in a 24 person bus at about 7pm at which time we headed down to their apartment. We’d never handled such a big group so finding an apartment was quite the task and although there aren’t any 19 bedroom apartments, we managed to find two buildings with multiple bedrooms that were perfect.

We hit the ground running and began drinking on the bus, some of the guys were already pretty plastered from a seemingly crazy previous night so getting them in the mood for a house party was not at all difficult.

Back at the house we went over some ground rules, the weekend’s itinerary, ways to get around and after hitting up the money exchange house, we were ready to talk about Miss Tanga 2016.

The contest was set to begin at 10 but being that it’s a contest where women have to look their best, the contestants didn’t start coming out until midnight. The lineup was completely different from the previous year and since Luxury is located in a completely different place now, the layout of the club is a lot newer.

The contest started the way it starts every year, contestants enter and greeted our 19 clients, introduced themselves as the entertainment for the night and then got on stage and teased the crowd for a bit.

As the night progressed, we ordered a total of 4 bottles of Grey Goose and 4 Johnny Blacks and at $120 per bottle, we kept them coming.

Every 20 minutes or so the girls would make a brief appearance on the stage to get the crowd on their feet and flirt a little bit to get people to vote for them in the last round. It didn’t take much to know who was going to make it to the final 4 and at about 1:30 am, the final four all went on the stage and tallied up their votes.

This year, there was no underdog starting from the bottom and moving up in the ranks. This year, from the get-go, we knew Lis, the most flirtatious and outgoing of the bunch, was sooner or later going to come out on top. She used her beautiful looks and Paisa charm to capture the audience who couldn’t get enough and stayed as long as they did for her.

After the thong contest was over, the guys were so blasted that most didn’t even know who won or remembered they were in Colombia, for that matter. This is when we knew to call our transportation provider to head back over to the house.

The day started with our VIP chef showing up in the morning cooking up Spanish style omelettes with onions, bacon and potatoes. The perfect way to start the day off after a long night. Breakfast was eaten by everyone and after a long night of partying and lots of drinking, these omelettes hit the spot and these guys proceeded to go back to sleep. Night 1 turned out to be too much for some.

Our concierge ended up spending the day helping clean up what appeared to be a junkyard full of bottles while the guys slept and contemplated why 10 years ago all of this was so much easier.

When everyone finally awoke, it was about 3pm which meant any chances for a daytime tour went down the drain. Of course they woke up hungry and ready to go over the night’s itinerary.

We ordered pizza from the city’s #1 pizza place serving up special pies and although it’s a vegetarian spot, their pizzas have been a hit since day 1. Look up Zorba pizza in Medellín and you’ll see what we’re talking about.

Turns out some of the guys had partied too hard the night before and our once thrilled group of 19 became a lonely group of 12. We went up to Gusto Nightclub in Parque Lleras and the club was lit. Naturally, we hit up the VIP and ordered our usual bottles of Johnny Black and Grey Goose and we immediately got the attention of a table of seemingly eligible females.

The music wasn’t the drake or the future they were used to but as long as the girls are bad and there’s liquor, these guys don’t put up much of a fight with the DJs. After about 3am the lights started coming on at the club and it was our cue to leave.

Saturday morning they couldn’t expect to sleep for as long as they did the previous day just because they had a Medellín City Tour scheduled for 1pm and a long day awaited if they wanted to go all out on their last night in Medellín.

As promised, we were picked up at 1pm and taken over to the Pueblito Paisa which happens to be a replica of a colonial like town. This mini town was built over one of the city’s highest peaks and the view of the city from this place is nothing short of breaktaking.

The next stop on this Medellín City Tour is downtown Medellín and Botero Square. Here is where you really get to see the real Medellín, far from tourists and English speakers in el Poblado.

We had lunch at Chef Burger because one of the guys when visiting Cartagena was told “they have the world’s best burgers”. Once they saw the size of a Colombian cheeseburger they realized one burger will not suffice, 19 people, 38 burgers.

Once lunch was done we went back to the apartment for a nap before the evening was set to begin. We scheduled our breakfast chef to come over in the evening to cook us up a BBQ composed of chicken hot dogs, steaks, chicken breast and homemade cheese arepas and some of the local brew.

We had a few friends come over for a party but little did we know that the bachelor had other plans. After looking for him for a long time, turns out the bachelor snuck out with his best man and took the concierge with them. They headed up to the girls club where after getting settled, called the rest of the guys to meet them up at the strip club. A little last night debauchery was on the way.

After changing over a thousand dollars into small Colombian bills the girls at the club wanted nothing but to chill with the crew and drink all of our booze. A small price to pay when the girls look that good. One word for this place, immaculate.

Back at the house, the guys had to pack for a 4am flight and although they were pretty blasted, they continued to drink the rest of the alcohol they had left at the apartment. Long story short, this guy had a long and difficult flight.