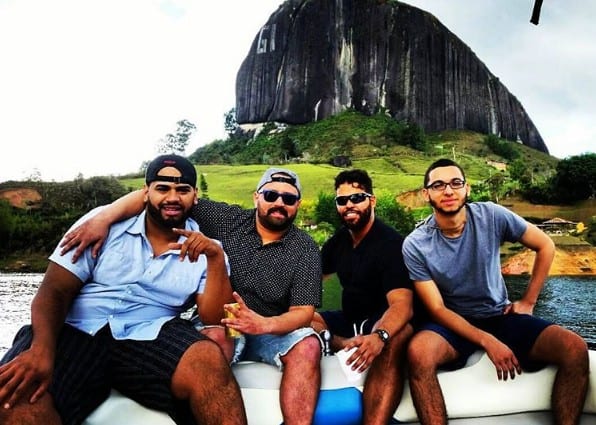 Here at Medellin VIP it isn’t uncommon for clients to plan their Medellin bachelor parties months in advance and not only has this been the norm, but it also makes things easier to plan out. It had been days since we held an actual bachelor party for clients so as October 22nd approached we knew the weekend was going to be memorable.

This past weekend we played hosts to a group of guys who we had been talking to since the beginning of the year. Expectations were high and although they would only be here from Thursday – Sunday we had much to deliver.

Our day 1 started off early as our first role is to make sure our clients’ surroundings were impeccable prior to their arrival. We stocked their apartment with alcohol and mixers to ensure these guys hit the ground running.

We sent our concierge up to the airport in our Mercedes-Benz sprinter limo and as they entered the vehicle they were met with alcohol, music on blast and indications that this weekend was going to be amazing.

At the apartment, the 7 guys became acclimated and immediately got down to business, playing their music, drinking (among other things). The apartment was not just stocked with liquor though, we also invited a few friends to help liven up the party because let’s face it, a pool table in the middle of the living isn’t enough to entertain.

The entertainment, great music, copious amounts of alcohol and rainy first night were an indication that a house party was in order. Day 1 although brief let these guys know they needed to pace themselves for how wild Medellin Bachelor Parties can get.

Although the weather has been a factor the past few weeks, we certainly weren’t going to let it stop us from having a good time. We began the morning sending these guys over to The Charlee Hotel for their delicious Colombian Breakfast made up of scrambled eggs, re-fried rice and beans as well as a Colombian pancake-like thing called arepa.

There was a Medellin city tour scheduled at noon (i’m not lying, we really do offer city tours) offered by our good friend and Medellin native, David. He was sure to take these guys all over starting from a brief trip around the Poblado area, to the center of the city where you’ll find the world famous Fernando Botero sculptures which are synonymous with Medellin.

The tour although private and in a large van with AC can be pretty tiring (especially after a night of partying) so we decided to take the drive all the way up to las Palmas where a deep tissue massage was in order.

The massage parlor was one of the highlights of the trip as it is situated way up in the mountains and has the feel of a restaurant/lounge bar with beautiful women walking to and fro. The alcohol might be overpriced but then again people don’t come here for the beer.

After a few hours at the massage parlor, we went back to their apartment where the guys got ready for dinner.

For dinner, 9/10 we’ll call up our contact over at Carmen and they always try their best to give Medellín VIP their best table. Not only is Carmen the best restaurant in Medellin but it is also one of the best in Colombia. After a few drinks, Korean steak tacos, pork belly bahn-mi and amberjack fish in a plantain crust served over coconut risotto we knew we had to hit the club. The night was young but we had a trip up to a villa up in the mountains early next morning we couldn’t afford to miss.

The club was next on list and after a bottle of scotch and Grey Goose, we knew the finca party the next morning was not one to be taken lightly and a hangover was not acceptable.

Finca parties are basically the highlight of our bachelor party packages and it is in no small part thanks to the logistics behind it all and the all day party experience. From the meeting, greeting and pre gaming on the bus to the feasting, music on blast and partying at the finca, there is no better experience.

We arrived at the finca pretty late (as expected) and this place was up in the mountains in San Jeronimo (a small town about an hour away from the city) and the chef was already there with snacks to absorb some of the liquor from the bus.

As everyone got into their swimming attire, we took the time to set up the sound system that was going to provide the life for a party that was unfortunately stricken by rain.

With bottle after bottle of GG and Johnnie Black, and hip hop as well as salsa alternated on the speaker, the guys felt like they were in a Rick Ross video.

A few hours later our chef cooked up chicken breasts, beef tenderloin and baked potatoes in a special Parmesan and garlic sauce along with a fresh greens salad. The perfect amount of protein and carbs for such a heavy drinking session.

Unfortunately weather conditions for that day was heavy rainfall but the guys were great sports and still managed to spend hours in the pool before hunger struck and a soccer game in the rain was in order.

After about 7pm our ride picked us up and it is here where we began to notice the 3 days of partying had taken a toll on these guys.

Back at the apartment, we had a few guests over for a last night house party before we saw these guys off. We started the weekend with about 15 bottles of alcohol which i’ll admit I thought was more than enough, little did I know that people from Miami are no joke when it comes to 72 hour binge drinking.

The hardest part of Medellin bachelor parties is realizing the weekend has come to an end and although we’ve done this more times than we can remember, every party and group is different and they’re all crazy in their own way.

Another bachelor party in the bag and another group of satisfied guys we hope to see here soon.

How do you Envision 3 day Medellin Bachelor Parties?