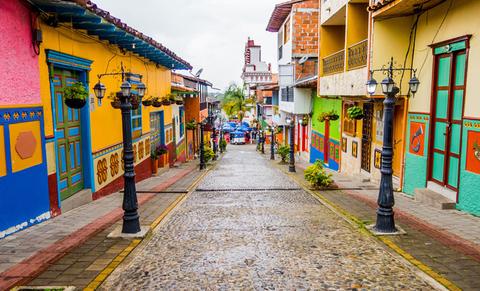 Guatape in 2016: The Future of Luxury in Colombia

Guatape is a travelers paradise because of its natural beauty and near perfect ambiance but what about it really captivates visitors and makes them want to return? We wanted to show you what Guatape has to offer so this past weekend we packed our bags and took the trip over to the small town and took in the sights.

We started out the day pretty early (at about 8am and don’t ask how we got this group to wake up so early after the Envy Rooftop Party the night before) because Guatape can get packed on the weekends. A van picked us up at one of our apartments and took us over to D’Andre for a quick breakfast and away we went.

The drive to Guatape is 2 hours but once you see the landscape on the way up there and how the city life starts drifting away to make room for that small town mood, you won’t mind the drive.

Our plan was to arrive at about 10am because we only had a day to cram in multiple Guatape activities and we wanted this group (like every other group) to see the view from the top of the Guatape rock (we hope you read the previous article we mentioned).

We arrived at about 10:15 and told the driver to immediately drop us off at the rock so we can get the most strenuous activity out of the way first (the site also begins to get crowded after about noon). It took us about 15 minutes to reach the top (not hangover proofed, yet) and believe me when I say, when you go up the last stair (#742) the combination of the lake, islands and houses below make your entire trip to Colombia worthwhile.

You can’t go to Guatape, climb the rock and not take pictures so for that reason we probably spent about an hour up there trying to get the right shots and making sure these guys really felt a sense of tranquility and enjoyed a true vacation.

Once we walked down the stairs we got back in the van and had our driver take us over to the more touristy part of the lake where the jet-skis were the first thing that caught the eye of these guys.

After about 45 minutes of jet-skiing across the lake we had heard the Charlee Hotel was in the process of making Guatape a must go not just for people traveling to Colombia but anyone looking for luxury travel in general.

They’re building a second Charlee Hotel right on the reservoir with 116 rooms, 2 tennis courts, spa, gym and the same amenities you will find at their luxurious Parque Lleras hotel. It is scheduled to be completed in early 2016. They also have their newly built (nearly completed) Praia Beach Club. The New York Times even featured this Guatape project (known as the Luxe Project) in their May 9th, 2013 edition and said it is “a one of kind resort in the area that offers a lavish lifestyle ambiance surrounded by nature.”

So we drove about 3 kilometres over to Praia Beach Club which is the new resort we mentioned and decided to have lunch at the Praia Restaurant. It might not be authentic Colombian Cuisine (Italian influenced for the record) but great food and a great place to spend the afternoon.

Anyway, after lunch our plan was to take in more of the sights and we noticed Praia Beach Club has an artificial beach and dock where we saw a few Americans wakeboarding and we couldn’t leave Guatape without trying it at least once.

We decided to give this a try and being that it’s not complete yet, some of us tried wake-boarding while the rest of the group tried water skiing. Long story short, none of us were skilled in either.

At about 6pm i’d like to say we stayed and enjoyed the town of Guatape at night but being that we’re not as young as we used to be, we just had to call it a night and drive back to Medellín. The water takes a lot out of you and being that a good 98% of the crowd was hungover, I’m surprised they lasted as long as they did out there. Another successful Guatape trip in the bag.

If you ask me, the best part about Medellín, other than its beauty, warm climate, picturesque landscapes and friendly people is that it’s still relatively unknown among world travelers. The best time to visit Medellín and Guatape would be now, while it’s still cultural, unknown and before the big corporations come down here and build a McDonald’s right on the reservoir.