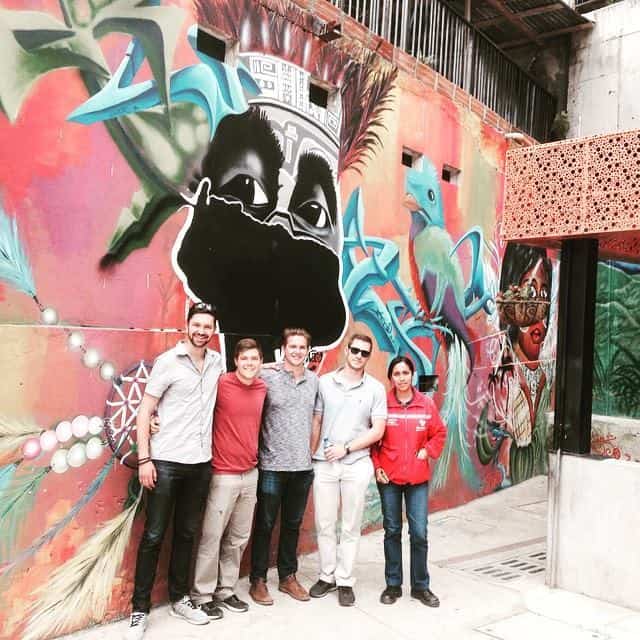 From Copenhagen to Medellin, Our Clients are International

Over the past 5 years that Medellín VIP has been in existence, we’ve always prided ourselves on being a local entertainment and hospitality group that caters to worldwide clients. All with different customs, different expectations, different languages and different senses of humor.

Last week we had the pleasure of hosting a group of 10 guys from Copenhagen, Denmark and for once in almost a blue moon, we had a group of clients that actually knew what they wanted and partying all night was not in their itinerary.

When we first heard these guys were arriving on a Monday, we were a bit skeptical. Medellín isn’t quite as optimized for tourists such as Baha or Cancun, so you’re not going to find a lit up club every night of the week. We mentioned that to these guys and they responded by simply saying, they weren’t here to go to nightclubs, they were here for the legendary strip clubs we always talk about.

We began by meeting up with these guys at the Charlee Hotel were after we shared a quick lunch, they went over that they wanted to see as much as the city as they could during the day, get that Medellín VIP experience, by day. Come night time, however, they wanted our legendary strip club excursion and host house parties in their lavish apartment.

After our meeting, our guides looked at each other and knew exactly what it was we were going to do to blow these guys away. The massage parlor was the first stop, high up in the mountains where very few go.

They call it Pablo Escobar’s mansion and although it’s seen better days, one can only imagine what it was like in its prime. With a huge garden area and bar, as well as multiple rooms and lounge areas, this is the ultimate massage parlor, worthy of any visit. We ended up taking these guys all three days they spent in Medellín.

After what was an interesting first few hours, we went to Careta which happens to be Medellín’s largest alcohol distributor where you’ll find alcohol you can’t get anywhere else in town. We bought multiple bottles of gin, snacks and more beers than we could count.

Back at the apartment, the guys got ready for a night out where we were all ready to visit Fase dos, or as we like to call it, home.

For those who don’t follow our blog or are new to the Medellín nightlife world, fase dos are the city’s most discernible strip club.

We got there pretty early and it was pretty slow, mind you, this was still Monday night. Being the only ones there, we had a great opportunity to get to know the girls on a personal level, receive extra attention, they drank with us, talked to us and although the dry Scandinavian humor is something no Colombian will ever get, at least they feigned interest in what we had to say.

The previous night ended at about 3 am and the first thing the next morning, we had a city tour at 9 am. Luckily, these guys were early birds and managed to get up in time to open the door for their guide, David.

David made sure to show them the different facets of the city, including, high up in the mountains where Medellín’s most affluent people live, the metro transportation system, the industrial part of town and even the center of the city where it is both touristy and heavily transited by locals.

We were sure to highlight the stadium where Atletico Nacional and Independiente Medellín (the local soccer teams) play and after informing them that Nacional was to play Sporting Cristal that very night in that very stadium, the guys immediately saw their opportunity to have the Medellín experience they wanted.

As the tour continued we saw the metro cable, the slums and we tried to have them see how the gap between rich and poor is just a few train stations away, something unheard of in the more developed Denmark where they hailed from.

We haad never seen a group of guys so interested in a city tour, you can tell they really wanted to get the best out of every place they visited. Medellín is a city stricken with so many problems in its past, has a lot to offer now and the fact that we receive clients like this, really shows us how much progress we’ve made.

When the sunset, we were picked up by David and taken to the stadium where the game was set to begin. The stadium can hold up to 45,000 people and there were easily 35,000 there that night.

The game ended up with the home team winning 2-0 and for guys that have seen soccer games all over Europe, they can now say they’ve lived experience not everyone that comes to Medellín lives. Going to an Atletico Nacional game playing in South America’s Uefa Champion’s league equivalent.

After the game ended, it was still relatively early and their flight was late the next afternoon. They decided to visit La Isla and bid farewell to Medellín at the city’s top strip club.

Again, it was only Tuesday and the club was dead when we got there but we witnessed a stripper get drunk and fall off the stage while sipping back Gin Tonics, some of the hottest girls Medellín and although the music wasn’t too exciting, the best part were the lap dances provided by the attention seeking girls happy to see foreigners there on a Tuesday night.

We ended up staying til closing which is surprising considering that they had been drinking since the city tour that began way back in the morning. Not only did we have to carefully escort them to our car but we also had to make sure the guys made it home in one piece.

The night ended on a high note and as most of our groups do, these guys woke up and the idea that they had to go home back to the sub zero temperatures and back to reality was in the air. What better way, though, to end the night than to visit the first place they visited here in Medellín, the massage parlor up in the mountains.

Medellín VIP caters to clients from all over the world, all you need is some basic English skills and the desire to want to have the Medellín experience of a lifetime.