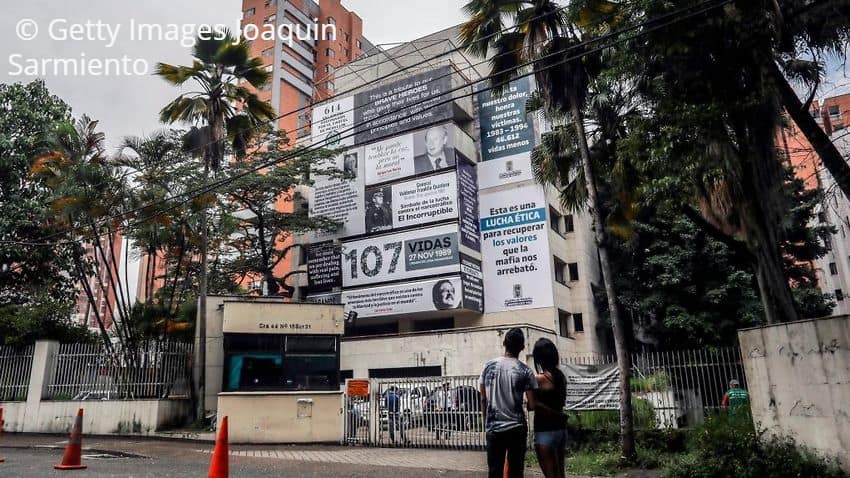 From constant stares to the occasional questioning, there has never been positive feedback for Pablo Escobar Tours.

In fact, any image uploaded to our social media that remotely alludes to he who must not be named is met with criticism.

However, six weeks ago there was an event that shocked the country and praised by Medellín locals. The implosion of the Monaco Building.

On the evening of Wednesday, January 13th, 1988 there was a near-apocalyptic ruckus that had the residents of Santa Maria de Los Angeles (one of the most exclusive neighborhoods in Medellín) fearing for their lives. The Cali Cartel had detonated a car bomb with 150 pounds of dynamite in front of the Monaco building. Then home to Pablo Escobar Gaviria and his family.

The bomb destroyed windows in a four-block radius, left 3 dead and injured 10. If that weren’t enough, this event triggered the bloodiest drug-related war the country has ever seen.

Importance of the Monaco Building

For a man that owned more than 500 buildings, the Monaco Building wasn’t the biggest or the most luxurious. But the incident in 1988 made it infamous. It made Escobar retaliate and residents of El Poblado realize that no one was safe from the violence.

But let’s fast forward to present day Medellín and the role it played in the resurgence of Medellín. The critically acclaimed Netflix series, Narcos encouraged thousands to visit Medellin but for the wrong reasons.

They visit Medellín for what is known as Narco Tourism and the general public tolerated it at first but after a while it was outraged. Swarms of groups gathered around the abandoned Monaco building in the very popular Pablo Escobar Tour.

Each day, dozens of people would stand in front of the building listening to stories and taking pictures in front of the deserted edifice. These tourists, ranging in ages, are enchanted by the tales of Escobar’s frivolous spending habits and rise to power.

Mayor Federico Gutierrez and the fall of the Monaco Building

Federico Gutierrez has been the mayor of Medellín since 2016 and has been known for his strict policy on gangs and narco-tourism. Gutierrez publicly condemned Wiz Khalifa for having his picture taken in front of the Monaco Building and punished a few public officials seen taking pictures with John Jairo Velasquez aka Popeye (former right-hand man to Escobar himself).

It was Gutierrez who ordered the implosion of the Monaco building and has openly expressed his disdain for tourists interested in Pablo Escobar.

So on February 22nd, just 1 month ago, the Monaco building fell to the ground and there are plans to build a memorial museum.

But what does this mean for Pablo Escobar’s legacy? It’s a big step towards having visitors ignore the Escobar Tours. However, with so much attention being given to the life of the world’s most notorious drug dealer, only time will tell if this implosion happened a few years too late.

Do you agree with the Mayor’s decision to destroy the Monaco Building?